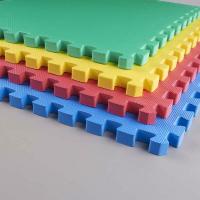 The Australian GDP figures demonstrated that the economy is growing at the fastest pace in 3.5 years. The economy expanded at 1.1% in the first quarter of 2016 and 3.1% over the past year. The rise in GDP was attributed to a rapid rise in exports due to the weaker AUD.  The net result was still positive for the AUD gaining over 1% on the release.

As a result Ezy Mats still remain one of the cheapest suppliers of jigsaw mats in the Australian market.